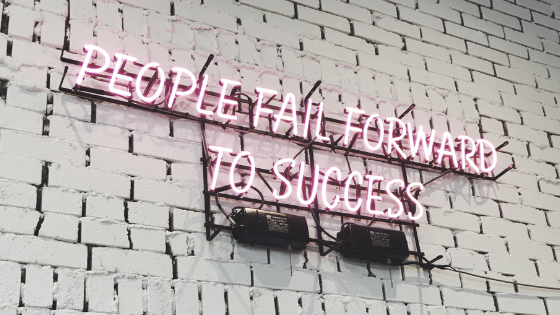 When faced with the prospect of success or failure, of course, most people would surely aim for the first. We often set them up as opposites, celebrating success and shaming failure. In many cases, though, it’s those moments of failure that act as the catalysts for major growth. Sometimes, certain mistakes and failures are necessary steps along your path to future success. Whether you’re working to achieve new business goals or focused on self-improvement efforts, here are a few strategies to transform failure into motivation for future success:

In the fallout of a failure, it’s important to take time to reflect. It’s not about dwelling on the situation and criticizing yourself harshly, but rather taking the time to look at what happened, what went right, and what went wrong. Look at your expectations and things you’d do differently next time. By assessing, you’ll learn more about yourself, your strengths and weaknesses, and mistakes to avoid. When you actively choose to gain something from each mistake and failure, you take control of their role in your life.

Experiencing one failure can often set us up to avoid potential failure in the future. Unfortunately, this also means avoiding potential success. If you allow a fear of failure to develop, you’ll find you’re placing serious limits on your success. When you restrict yourself to a safe zone, you dramatically limit your growth. When you choose comfort over experimentation and safety over expansion, your business will suffer.

Risks drive growth. This doesn’t mean making large impulse moves, but rather making calculated decisions that hold the possibility for greater success. It’s about assessing each risk and calculating the potential benefits and consequences. Once you understand the possible outcomes, you can decide whether you think it’s worth taking or not. For example, you might want to better reach a millennial audience, so you begin considering new ways to market to them. Trying something new opens up the possibility for both success and failure. No matter which outcome you encounter, you’ll learn something new about how to proceed in the future.

Failure has some pretty negative associations. Instead of seeing mistakes and missed goals as failures, start seeing a lack of trying as failure. Today’s loan officers need to be adaptable and eager to evolve. When you intentionally change the way you view failure, you change the way it impacts your business. While failure is never the goal, it doesn’t need to be something we fear and dread. Instead, we can flip it into something that drives us forward.

Using your failure to create success is all about taking control. When you’re intentional about how you respond to failure, how it influences your actions, and how you think about it, you get to decide what role it plays. The most successful professionals know that focusing on failure’s ability to teach and motivate is their best option for moving forward. What are some strategies you use to turn failure into future success? Share them with us.

Finding a Work-Life Balance as a Loan Officer

This is not an advertisement pursuant to 12 C.F.R. 1026.2(a)(2). This is informational, recruiting material intended for mortgage professionals only and is not for distribution to consumers or prospective applicants for residential mortgage loans. Cardinal Financial Company, Limited Partnership, NMLS ID 66247, is an Equal Housing Opportunity Lender. Corporate Address: 3701 Arco Corporate Drive, Suite 200, Charlotte, North Carolina 28273. Licensing information can be found at: https://cardinalfinancial.com/nmls-licensing/.